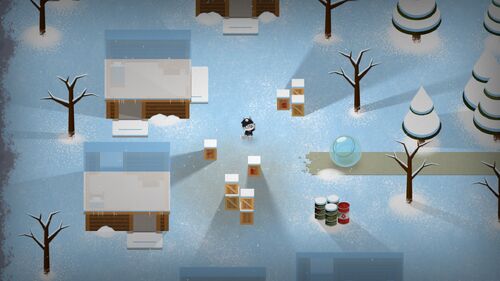 Western part of Thomas's Tundra by some snow covered houses

Thomas's Tundra is located on the north most point of the island, and closest to Superite Mountain and S.A.W. Research Labs. Presumably named after Thomas Sleddison, it is a snow biome featuring several frozen lakes like Lake Slippity, igloos, tents, the Super Penguin Palace and Thomas's Workshop. Thomas's Tundra is a huge area with many open areas, and houses to go into cover or loot. Players seem to be dissuaded to intially drop here a lot of the time, since their isn't very much cover, especially around the frozen lakes, and around Super Penguin Palace. The slippery ice like in throughout the are is most likely another factor in this. If a player is in Thomas's Tundra, there is a small chance that the player will see it snow when wandering around the area.

There are many small areas players can loot in Thomas's Tundra that can provide players with good loot early on in the game. On both the eastern most, and western most sides, players can find storage units scattered around that have Crates, and useful Pickups around them. There are igloo houses on the western side near Super Penguin Palace that may contain good loot, and usually have a Rebel Caches spawned in one of them. On the eastern side is Thomas's Workshop where famed inventor Thomas Sleddison resides with two entry and exit points with some loot in it. There are many tents and some snow covered houses located south east of the workshop players can also go loot. There are a few Campfires in the Tundra, most of them are located north, with a few being located south closer to Superite Mountain. When traveling in the Tundra, it is recommended that players check around tents as they may have a chance to have some random loot spawned in front of them.

Areas around Thomas's Tundra are the only locations in the game that players are able to do the Super Challenges of meters skated on ice.