Superite Mountain is a mine and a abandoned rebel base located on the north western side of the map near Thomas's Tundra and north of the Super Saharaland. Inside the mine, you can see superite unmined on the eastern side as well as what appears to be an abandoned Rebellion base the western side. On the eastern side of the mountains, there is a raven statue, with some bones surrounding it, an abandoned rebel base with wanted posters for both Donk Patrick and Howl Michaels, and Prison Rat (Cheese Goudara) pacing back and forth in their cell. On the western side of the mountains, there are the superite mines with unmined and unrefined superite, and two wooden bridges over the stream that goes into the mountains. The prison on the eastern side was featured in SAR Tonight episode 4, in which the rebellion took hold of Donk Patrick and Howl Michaels and held them hostage.

With over 20 points of entry/exits into/out of the mountains, it's a very dangerous area to linger too long before enemies ambush players. Usually, a hot spot for players to drop to, and provides players with high tier loot early on in the game. A lot of Crates are located in, and out of Superite Mountain that can provide players with many Pickups early on. Be careful of explosive Barrels, as there are many in, and outside of the mountains! There is a useful Campfire in the middle of the mountains that can heal players quickly if needed. 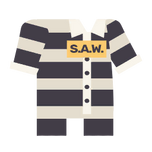 Rare
Prisoner Outfit
Shoot the "(Not a) Rat" with a dart