Super Saharaland is one of the core locations in Super Animal World featuring a desert biome. It is a desert located on the western end of the island, north of the SAW Villa and south of Superite Mountain. It features an oasis with beaches with palm trees that provide Coconuts along its west and south coast making it an ideal spot for players to finish their Super Milestone or Super Challenges of eating coconuts. Cacti and rocks are scattered around to provide cover from attacks.

There are many points of interest in Super Saharaland such as the Super Pyramid located in the middle of the desert with many secrets to discover, a Giant Emu Ranch south of the desert, and many run down houses/villas throughout the area for players to go in and loot. On the western most side of the desert is a port with many Pixile stamped storage units scattered around that can provide good loot for players. In between the villas on the western side, and the Super Pyramid lies an oasis with plenty of palm trees and Coconuts as well as a Campfire located nearby. The Giant Emu Ranch is located on the southern part of the desert with 3 points of entry/exits. This is a good place to quickly grab some decent loot, and immediately leave as it is easy to be trapped here by enemies. Usually, a Giant Emu usually spawns in the ranch or outside of the ranch. A key feature of this location is the Super Pyramid in the middle of the desert that is usually a hot drop of most players, and can provide a lot of good loot early on. On both the eastern and western sides of the desert are many run down houses throughout the desert making it a very good choice to pick through loot by going house to house. CQC (Close Quarters Combat) can be a very viable option for players to use when looting from house to house. South of the Giant Emu Ranch is a small fishing house with a wooden walkway connecting Super Saharaland to the S.A.W. Villas.

One melee weapon skin can be unlocked in the Super Saharaland. 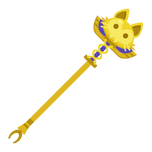 The only secret area in Super Saharaland. 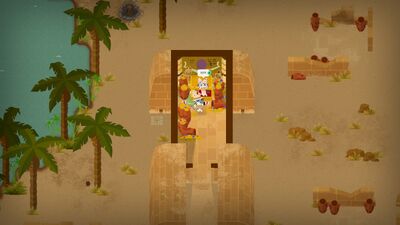 Inside the secret tomb of The First Skullcat in Super Saharaland.