Edit
Looking for information on the original version of this game mode? S.A.W. vs Rebellion/Legacy

S.A.W. vs Rebellion is a limited time game mode in which the Super Animal World forces fight against the Super Animal Super Resistance on a series of locations around Super Animal World. It is a Control Point style game mode between two teams of 24 Super Animals each, featuring a selection of specialized classes and maps to play on. The goal of each team is to cause the enemy team to run out of points, by capturing flags, killing enemies, and by vanquishing the Giant Star-nosed Mole and capturing its reward crate. After being killed, Super Animals may respawn at their team's spawn point. [1][2]

The mode was first introduced publicly in the Public Test Realm (PTR)[3], and was initially a team elimination mode, with a flag control game mechanic, spanning the whole Super Animal World.

Hamster Balls will spawn near a team's spawn point. When these Hamster Balls are broken, they will respawn after a short while.

Giant Emus will spawn around the map. If they are killed, they will respawn at their original position if no players are nearby.

Upon death, Super Animals do not drop the contents of their inventory in this mode, and instead drop a random set of pickups, such as

Ammunitionlist exact numbers if known. Pickups can still be obtained by breaking

Egyptian Pots and by cutting

In this mode, the "Need Help!", "Danger!", and "Go go" pings can be seen and heard by all players in the same team. In addition, players can also ping the flags to notify their teammates to capture or defend it. Pinging a flag is also audible and visible to the entire team. The ping's chat message will only be visible for members of the same squad.[4] 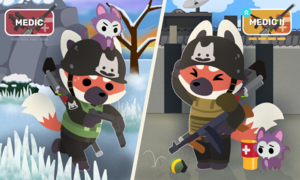 There are 5 classes to choose from in this mode. Players may pick a class before the match begins, and can switch to another class after they die. Players are locked to the respective weapons of their class, and are unable to swap or loot weapons. Players will only pick up ammo that their class can use.

Players may unlock the Tier 2 loadout of their class by earning 4 kills, or in the case of the Medic, by healing allies with the

Dogna's Dart Gun, where 75 health points healed counts as one tick towards the upgrade. Once the requirements have been met, the Tier 2 version will be available in the class selector before respawning. After the Tier 2 loadout has been chosen, it will revert to the Tier 1 version after the next death, and will need to be unlocked in order to be used again.

Scout is suitable for capturing flags and tagging enemies as the class specializes in speed and agility. Scout's loadout makes them vulnerable at middle range, often forcing them to choose between narrowing the distance to use close range firearms like their

SMG, or fleeing to be able to use their

Bow & Sparrow from a safe range.

Dogna's Dart Gun, but it can also be used offensively to deal poison damage to enemies, allowing the rest of your team to finish them off. The

Cupgrade allows medics to heal up quicker, shortening the time they need to spend outside the battlefield.

Bananas are useful to protect the flag from being captured, or slipping enemies to finish them off with the

Thomas Gun. It's advised not to throw banana peels where teammates are more likely to slip on them than enemies.

Assault is a class which focuses on offensive tactics. This class focuses on using their

Grenades, which can be useful for clearing out enemies in enclosed areas. Animals using the Assault class are most powerful working together as a team. When supported by animals using other classes, they can provide a barrage of firepower that prevents enemies from approaching.

Sniper allows players to provide firing support from afar with the

Sniper. It is useful for holding down long corridors and for sniping animals with broken armor in large firefights. Weakened animals can also be finished off with the

Heavy is for those who feel the offensive is a higher priority than the defensive. Equipped with

Magnum, they can kill their enemy faster than the other classes, but risk getting killed early. Using their

Grenades, they can deal area-of-effect damage to defend their flags from being captured or trapping the enemy who are in groups.

If there is an actual tie at the end of the game where both teams have exactly 0 points, the winner will be decided by a coin toss.

Flags are the main objective of this mode, and are neutral at the start of a round. Flags take 5 seconds to capture. The team that currently owns a flag will receive 4 Health Points per second in a small zone which is visible as a green circle around the flag. Capturing a flag from the opposing team deducts 10 points from the team who lost the flag. The player who captured the flag will gain 1 tick towards upgrading their kit.

Flags can only be captured by one Super Animal at a time. The flag will stop being captured if the animal capturing it moves away from the flag.

The Giant Star-nosed Mole appears 25 seconds after an announcement when a team has reached 400 points. The mole will defend itself by throwing crates, and will slam the ground to attack any players who approach too close. The crates the Mole throws have a chance of dropping ammo. The amount of health points the Giant Star-nosed Mole has depends on the amount of non-bot players in the game, scaling from a base of 6900 HP at 20 non-bot players and below to 10000 when there are no bot players. At half health, the mole will return underground. When it re-emerges, it will throw crates 40% faster than before.

When the Giant Star-nosed Mole is defeated, the team of the player who landed the last hit will receive a 20% speed boost for 1 minute. The mole will leave behind a special reward crate which can be opened similarly to capturing a flag. Opening the crate will deduct 100 points from the opposing team. Opened crates display an image of a team to which the animal who opened the crate belongs to.

The Giant Star-nosed Mole is a good opportunity for teams to come back when they have less points. By securing the crate, they can deduct 100 points from the other team, which can turn the tide of the battle. The speed boost is also useful and can allow a team to secure more flags or kills.

There are currently 8 maps implemented. Each map is centered around a Super Animal World landmark. Each map has a spawn point for S.A.W. and Rebellion forces alike and 3 flags for each side to gain control of in the middle; one on each side, and one directly on the map's dividing line. S.A.W. forces always start on the right side, while the Rebel forces always start on the left.

At the end of the match, up to four top players are selected and displayed for accomplishing outstanding feats in milestones such as: