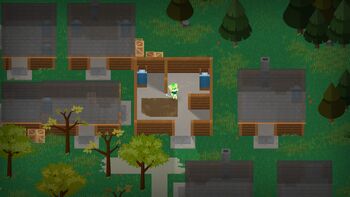 Located on the western side of the Map, S.A.W. Villas is a core location in Super Animal World. North of Pete's Swamp and west of S.A.W. Bamboo Resort, S.A.W. Villas is a small location with a few small villa buildings for players to go into to look for loot. This is not a hot drop as further north is an unmarked location on the map that has more small buildings for players to look through and also usually yields higher tier loot. Being a very small location in Super Animal World, close quarters combat is an excellent option as well as well as long ranged combat on the south, west or eastern sides as there are big clearings in these areas and not much cover for players to utilize. Delivery Mole and Rebel Caches frequently spawn around/near this area making it a good location to quickly look for loot. It's recommended that players don't stick around in the villas too long as it's very easy to get ambushed here considering it's near many hot drops such as S.A.W. Bamboo Resort and S.A.W. Welcome Center.

Located to the north of S.A.W. Villas is a Campfire at a campsite players can use to regain health back. Further north, lies an unmarked part of Super Animal World with many abandoned/boarded up houses that is usually a better choice for players to look through, as it provides more, and usually higher tier loot. There are many Crates in this unmarked location, making it a good spot to look for Pickups. On the eastern side lies a Pie of the Tiger promotional billboard, and plenty of Tall grass and Mushrooms for players to recover health, and scavenge for Pickups. On the western side is a bridge leading from Super Animal Super Stage to S.A.W. Villas. There is a Pandup Comedy billboard advertising the Panda Comedy in S.A.W. Bamboo Resort, and some more Crates players can use to look for pickups or use as cover from enemy fire. Going north from the bridge will lead players along a stream of water near a campsite, and a cave to look for loot. On the southern side lies the main pathway to Giant Eagle Landing and a billboard advertising Slow Food restaurant in the Welcome Center. There are a few more villas/buildings players can look in here, and a campsite with another Campfire for players to recover health at by Pete's Swamp.

S.A.W. Villas on the map