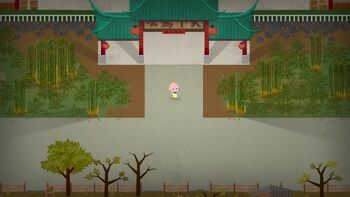 Located at the center of the map, just north of Super animal farm, S.A.W. Bamboo Resort is a Chinese themed core location in Super Animal World. With many entryways/exits in and out of this location, S.A.W. Bamboo Resort is a hot drop where many players initially land at the beginning of the game. Landing here can yield players good loot, but considering it's located at the very heart of Super Animal World, many players drop here to gain high tier loot early on. This location is one of the major hot drops in the game, and ambushes/engagements with other players is very likely upon first landing here. Caution is advised. Bamboo Stage contains many breakable Crates on the stage for players to destroy to get many useful Pickups. Be careful as there are some explosive Barrels strategically placed around some crates that can catch players unaware when looking for loot. Rebel Caches usually spawn around Pandup Stage on the northern side of the resort as well as around other areas in S.A.W. Bamboo Resort. Outside the resort are many Bamboo shoots that grow exclusively in this area, and plenty of Tall grass for players to chop down to get necessary Pickups. There are also some Campfires outside the resort for players to use to gain some health back. Tents, and what appear to be small shrines around the resort can also supply players with some good loot. On the southern part of the resort is the main entrance, and all the destroyed/messy office building complex. Close Quarters Combat here and outside the resort is a very good option for players to use with narrow space, and not much room to maneuver around.

The super animal statue placed in the heart of the resort changes depending on the Chinese Zodiac sign of that particular year. For example, since 2021 is the Year of the Super Ox, there is a Super Cow statue placed there. Another fun easter egg is that past Super animal statues that were placed in the center of the Resort can be found as framed pictures in one of the offices on the south eastern side of the Resort. 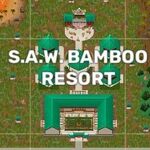 S.A.W. Bamboo Resort on the map

Upon going onto the Bamboo Stage in S.A.W. Bamboo Resort, players have a chance to hear one of these five pre taped comedy acts!