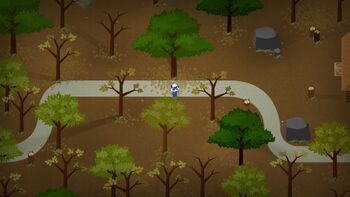 Goldwood Woods is a Forest biome and a core location in Super Animal World. Being one of the largest locations on the Map, it is located on the south eastern most point of the island, east of Super animal farm, and south west of S.A.W. Shipyards. Despite being on of the largest areas in the game, Goldwood Woods is not usually considered a hot drop by players, as players usually prefer to drop in Super animal farm or even Pete's Swamp that arguably can give players better loot early in a match. Goldwood Woods features many options for players to look for loot such as; campsites spread out throughout the woods, villas located on the northern side of the woods that can provide players with good loot, and may also contain a Rebel Caches, and a cave located on the south eastern area. Primarily being a very open location in the game in most areas, long ranged combat is recommended to give players an advantage in firefights. Many houses, trees, Barrels, tents, storage containers, and large boulders spread throughout the area can provide good cover for players if caught off guard by any enemies.

Goldwood Woods is an excellent area for players to work on the mushroom milestones with a plentiful amount of Mushrooms that spawn throughout this area.

Goldwood Woods on the map