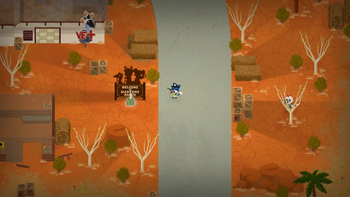 The Giant Emu Ranch is a smaller location in the Super Animal Royale map and lies at the southeastern point of Super Saharaland just southeast of the Super Pyramid. It was at a point that the Giant Emus were trained and raised at the ranch, but after the rebel attack, they all escaped. All that is left in their wake are the horseshoes and saddles they wore and the hay that they would eat. Also present throughout the building are many Crates and enough loot to outfit Duos or even a Squad of Super Animals. Giant Emu Ranch also contains stalls inside the main portion of the building as well as stables outside just south of the main entrances where Giant Emus were stored and can sometimes still be found. To the southeast of the building, a sign can be seen reading "WELCOME to GIANT EMU RANCH" with the silhouette of an straddled Giant Emu with with two riders, a Super Deer and a Super Bear.

Giant Emu Ranch is segmented into three portions and possess three entrances, each one on the south face of the building and allowing entrance into the individual segments.

In addition to the main building, Giant Emu Ranch possess two separate sets of stables to the front of the building, a larger set containing two stalls directly south of the middle entrance of the building clad with wire fencing and usually containing a few pieces of loot, and a smaller set also containing two much smaller stalls southwest of the main entrance to the rental office where little to no loot can spawn. West of the Giant Emu Ranch rental offices entrance is a campfire.