All available game modes in Super Animal Royale. Some of these game modes such as; S.A.W. vs Rebellion, and Mystery Mode are rotating game modes. In other region servers such as EU, Squads is also a rotating game mode for when S.A.W Rebellion, and Mystery Mode are in the rotation for game modes available to player during that period. In almost every game mode (except Private Match), if there are not enough players for a full 64 player match, at the 15 second mark in the pre-game lobby, the game will fill the remaining empty spots with Bots for players to play against. Players are not able to be on the same squad as a Bot. If players enable the "Autofill" option in team game modes such as Duos or Mystery mode, they will be paired up with another random player. If players have it turned off, the player will be playing by themselves in that game mode.

The player vs. 63 other Super animals. This is the Free For All game mode for Super Animal Royale. All super animals land around the island for all out war. The last player standing is the winner! Teaming by any means, is NOT allowed in this game mode, and is a reportable offense for Super Animal Mods to review.

The player and a teammate vs. 31 other teams of 2. The final player or duo that's left standing is the winner. If the player's duo partner dies, they can still win the match if the surviving partner is the last one standing. If a player's partner quits the match after dying, they will forfeit all possible rewards for that match. They must wait to their teammate to either win the match or die to get their rewards for that match.

The player with three other teammates vs. 15 other squads. The final squad or player left standing is the winner. If a player's squad dies, they are still able to win the match for their team if more than one person is alive on their team, and kills the remaining squad. Like Duos, you must wait for your team to either win or die to collect the rewards for that match.

A 32 vs. 32 team based deathmatch/capture the flag game mode. Players are put on a team of 32 people, (bots are included in your team, but never your squad) but are in a squad of four people. The goal of this game mode is to either eliminate all enemies, or successfully hold 3 out of 4 of the flags around the island for a set time. Once either of these conditions have been met, the players on that team will win the match. The player's hat will always either be a S.A.W Helmet or a Rebellion Helmet depending on what team you are on. If a player's squad gets eliminated, they will be able to collect their rewards for the match and leave.

Squads based game mode with a randomized game mode different each game! In every game, you have a chance to get one of the 7 following game modes; 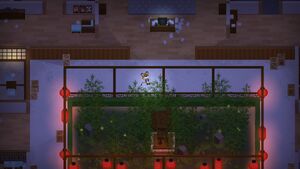 Each of the game modes has a 9% chance of that game to be a game that takes place during Night Mode. Night mode is as it's name suggests, Super Animal World at night with noticeable environmental/lighting changes throughout the island. Visibility is more limited for players, and offers a bit more challenge and diversity to player's games.