Super Monkey firing a Pistol at an Explosive Barrel.

Barrels are placed across most map regions, and are separated to two different types.

Explosive barrels are bright red in color, with a white horizontal stripe and a "flammable" marking on them. When Explosive Barrels receive any form of damage (apart from being hit with a Poison Dart Gun) they explode damaging any nearby players along with destroying crates and potentially detonating other nearby Explosive Barrels. Explosive Barrels cannot damage or remove items on the ground (such as dropped Armor) with the exception of bananas.

Alongside grenades, explosive barrels are the only damage source in the game that can deal damage to both HP and Armor at once. 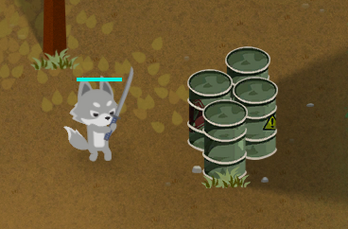 Waste barrels serve as obstacles to bullets, vision, and movement. They are green in color and have a dirty appearance.